FRANCIS ROSSI follows the success of his ongoing ‘I Talk Too Much’ UK spoken word tour with a huge 60 date run in 2020 Tickets will go on general sale on Friday 26th April at 10am from: http://statusquo.co.uk/

Rock legend Francis Rossi will hit the road in Spring 2020 for a mammoth 60-date spoken word tour – fresh from the success of his best selling autobiography ‘I Talk Too Much’ and number one country album ‘We Talk Too Much’.

Rossi has been thrilling crowds in theatres and arts centres across the UK this spring and is hitting the road again next year due to unprecedented demand. With many of his 2019 shows selling out, he’ll be back from March 11 until June 9 next year. He’ll visit England, Scotland, Wales, Northern Ireland and Ireland, reaching all parts of the British Isles.

His show, also called ‘I Talk Too Much’, features Rossi in conversation with best-selling author Mick Wall. The Status Quo star also takes his guitar on stage to treat fans to some acoustic music.
Rossi said: “I’ve been thrilled by the success of my first spoken word tour. The venues have been packed, the fans have been having a great time and I’ve been enjoying it too.

“The venues and fans wanted us to go out again, so we’ve bowed to demand and we’ll be on the road next spring.”

Rossi’s autobiography entered the chart at number three and remained in the top ten for a month while his Country album with Hannah Rickard went to number one on the Country Chart. 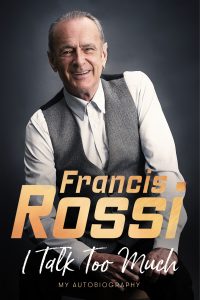 Francis Rossi, founder of the mighty Quo, is gearing up for a busy 2019. Rossi, a bona fide musical legend, has confirmed the release of a collaborative album with vocalist Hannah Rickard, a brand new autobiography written with Mick Wall, and a spoken word UK tour that will see him and Wall tour the country discussing his Quo guitarist’s illustrious career and taking questions from fans.

‘We Talk Too Much’ is the title of the album by Rossi / Rickard – the pair met when Hannah Rickard worked with Status Quo on the hugely successful ‘Aquostic’ projects. Reconnecting with one of Rossi’s true loves, this is a collection of Country-flavoured duets and is due for release 15 March 2019 via earMUSIC. Featuring all brand-new material, and boasting writing credits for Rossi and Rickard as well as Quo stalwart Bob Young, this album has been a true labour of love.

The new autobiography, ‘I Talk Too Much’, is to be published by Little, Brown on 14 March 2019. This gripping brand-new book has been created in conjunction with award-winning writer and broadcaster Mick Wall, who has sold more than 1 million books. In this explosive new memoir, the famously indiscreet Rossi reveals the true-life stories behind his unbelievable career. Painfully honest at times, the book covers the glory years, the dark days, the ups and downs of his relationship with the late Rick Parfitt and the real stories behind the creation of some of the greatest rock music of all time.

Rossi will share the extraordinary secrets of his 50-plus years in rock’n’roll when he takes to the stage for an intimate evening at 36 theatres across the UK. Kicking off on 20 March 2019 in Whitley Bay and culminating on 20 May in King’s Lynn, the ‘I Talk Too Much’ tour, will feature Francis – joined by Mick Wall – sharing some of the best Rock ’n’ Roll stories ever, accrued during an extraordinary life on the road. Expect laughter, revelations, tales involving some of the giants of music, exclusive video clips, snatches of classic tunes and a great night out. Rossi said: “This show is something new for me. It will be live and unscripted, so god knows what could happen! One thing’s for sure though, it’ll be a white-knuckle ride for me, but fans will get a real unvarnished insight into what’s happened over the years.  I’ll be taking a guitar along to demonstrate how some of those Quo classics came into being, and hopefully we’ll take a few questions from the audience too. It’s been quite a journey, there’s a lot to share.”

2019 will be a year like no other: with an album, book and tour, Francis Rossi has truly stretched himself creatively but is also connecting as never before with the loyal fanbase built up over fifty years of creating history with Quo. Honest to a fault and always good company, ‘I Talk Too Much’ is aptly named, don’t miss Francis Rossi spilling the beans as never before!

‘We Talk Too Much’ ALBUM is available to pre-order: https://rossirickard.lnk.to/WeTalkTooMuch

‘I Talk Too Much’ BOOK is available to pre-order: https://amzn.to/2SWp0ZM or https://bit.ly/2QtHEqn

‘I Talk Too Much’ UK Tour tickets available at: www.statusquo.co.uk

​Legendary Status Quo lead singer Francis Rossi will share the extraordinary secrets of his 50-plus years in rock’n’roll when he takes to the stage for an intimate evening.

In Francis Rossi: I Talk Too Much, the founder, lead singer and lead guitarist of Status Quo will talk about his mishaps and adventures of life on the road with one of the biggest and most loved bands ever.
Francis is a true member of British Rock Royalty.  He sang the first words at Live Aid in 1985, survived the obligatory rock’n’roll brush with alcohol and drugs, was awarded an OBE in 2010 and has a BRIT for his Outstanding Contribution to Music. His band has sold more than 120 million records globally.
Expect laughter, revelations, tales involving some of the giants of music, exclusive video clips, snatches of classic tunes and a great night out.
Rossi will be joined on stage by award-winning writer and broadcaster Mick Wall, who has sold more than 1 million books.

Ticket prices vary from venue to venue.
There are a limited number of VIP tickets available, you will receive a VIP lanyard and a 10 x 8 photograph of Francis.